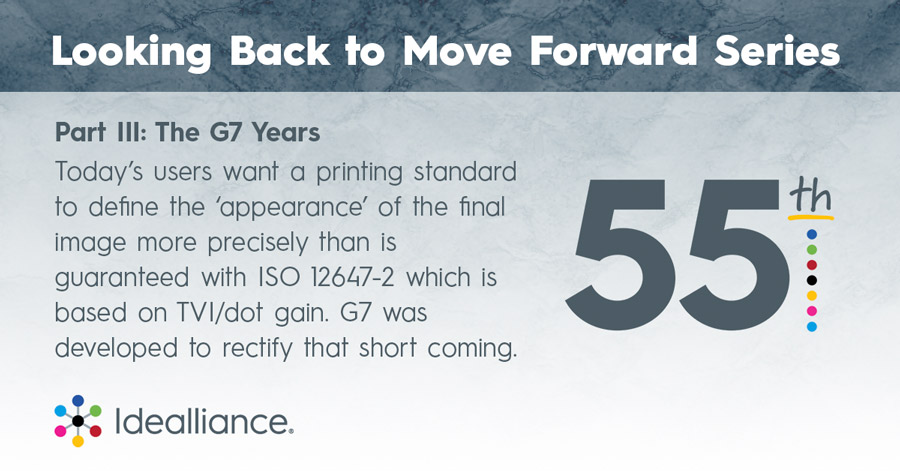 In January 2021 Idealliance celebrates its 55th Anniversary. As we look back it is important to see how Idealliance fostered the development and adoption of key information technologies that today form the foundation of the Internet and server to server communication protocols across the print media supply chain. Idealliance DNA is steady and unfailing – creating change-oriented and digital-centric initiatives engaging collaboratively all partners in a supply chain. From 1980 until today, Idealliance has redefined itself and the industry through its focus on information technologies.

If you would like to contribute to our Look Back to Look Forward Series contact David Steinhardt, Managing Director, at dsteinhardt@idealliance.org.

Idealliance was initially founded in January 1966 as the Computer Section of the Printing Industries of America (PIA). See the rest of Part I Here ».

Early in the twenty first century, with the launch of XML and the commercialization of the Web, membership grew to include the new generation of tech companies. See the rest of Part II Here »

But following the impact of 9/11 and the disruption caused by new digital publishing platforms, Idealliance once more turned its technical focus back to print and emerging print technologies.

The Rise of the Spectrophotometer

To control any process, including printing, quality needs to be measured and monitored. In the early days of printing, quality was evaluated and tracked by visual observation. In some cases, visual observation is still employed. As printers strived to achieve a color match, color quality was most often evaluated using a densitometer. Densitometers measure the density of a printed sample which is only a measure of the absorbance of an ink at specific wavelengths of light. Density is useful because it corresponds closely with the relative ink film thickness of most printing inks.

While most printers would agree that it is very difficult to see the difference between yellow ink at a density of 0.8 and a density of 1.0, this is an easy task for the densitometer which replaces human subjectivity with an objective measure of the ink film thickness. For this reason, the densitometer quickly surpassed the capabilities of even the best trained eye for monitoring ink film thickness on a printed sheet. Establishing and maintaining correct solid ink densities is critical for color accuracy and repeatability as color separations are made based on a specific set of solid ink film densities.

But there was a problem with relying on densitometers to control color fidelity. Densitometers do not measure color. And even though densitometers can be used to calculate Tone Value and Tone Value Increase (TVI or dot gain), a densitometer cannot measure true color or the differences between two colors. And due to the method densitometers use to quantify light absorption, they are limited to evaluation of C, M, Y, K and are unusable for measurement of spot colors. To determine if 2 colors match each other or to quantify the color difference between 2 colors, a new device, a spectrophotometer would be required.

Spectrophotometers were first made commercially available in 1979 when Hewlett-Packard launched the HP 8450A. This device offered all of the capabilities of a densitometer and also had the ability to actually measure color and numeric color differences according to how the human visual system sees and interprets color. Printing to match a set of CIE Lab or LCh values from a spectrophotometer describes precisely how the color should be look when printed. This is why brand owners and printers alike began employing spectrophotometers in the pressroom and throughout their workflow. But early spectrometers were bulky and expensive, and it would take printers time to determine how they could be best used to assure a visual color match.

By 2003, print buyers and their printers were becoming dissatisfied with traditional methods to produce a reliable color match. Complicating matters is that print buyers wanted printers to achieve a visual match in color no matter what the substrate. Buyers wanted the large sign, the printed carton or can and the advertisement in a magazine to have a visual color match, as color is a key component of branding.

In 2003, a group of advertising agencies and magazine publishers employed a color scientist, Don Hutcheson, to run a series of experiments to determine how a visual color match could be assured. Since all parties were in New York City, the project was called the “Manhattan Project.” Results of the project were shared across the printing community and interest grew. When the Manhattan Project came to the attention of Idealliance, participants were invited to continue their work as part of the GRACoL Committee. With this merger, G7® was born.

At the time the GRACoL Committee began their work to formalize G7, ISO 12647-2 was the bible for achieving print color fidelity. This standard was based on densitometer measurements and did not employ the latest color science or measurement devices. Idealliance found the ISO standard’s reliance on a small number of solid ink colors and TVI curves limited its value in ICC color managed workflows. The stated problem was that ISO 12647-2 was ambiguous due to the use of multiple TVI curves, and the lack of a colorimetric definition for gray balance. Today’s users want a printing standard to define the ‘appearance’ of the final image more precisely than is guaranteed with ISO 12647-2 which is based on TVI/dot gain. G7 was developed to rectify that short coming.

To develop G7, the GRACoL Committee conducted nearly 20 press runs in the US and globally. Colorimetric data from each press run was used to refine the G7 calibration process and to refine the G7 calibration method. GRACoL 7/G7 eliminated the TVI problem entirely by replacing the ISO standard’s multiple TVI curves with the new concept of a single neutral print density curve. NPDC is based on the relationship between measured neutral density and original halftone percentages on a printed gray scale. Because neutral density is an absolute value, while TVI is a relative function, NPDC ensures a better contrast and density match between multiple devices. According to its developers, “The primary advantage of the G7 calibration method is that the visual appearance of neutral tones and near-neutral colors is more effectively controlled than by traditional TVI-based methods.”

As with any new methodology, G7 was not immediately embraced by all printers. The European Color Initiative for example, publicly argued in favor of continuing to use the ISO 12647 and indicated that its members saw no compelling reason to replace the standard with G7. Idealliance countered that G7 was not developed to be in competition with ISO printing standards, but instead should be seen as a best practice for implementing ISO 12647-2. A test designed to compare traditional ISO 12647-2 printing methods with the new G7 method was organized in 2006 by the BPIF (British Printing Industries Federation) Technical Standards Committee. “A color test form was designed and prepared to incorporate both the Fogra and GRACoL G7 control targets.” According to BPIF, “When both sets of printed sheets were subject to close comparison, the color and appearance of the two tests results were remarkably close,” which indicated that both (Fogra or the GRACoL G7 ) could achieve the ISO 12647-2 standard.

Early in the development of G7, Idealliance involved print buyers directly. This was critical because it was the print buyers who initiated the Manhattan Project and who were looking to G7 to protect brand equity based on the faithful match of brand colors no matter where in the world the article was printed or upon which substrates images were printed. Because print buyers were so engaged, G7 quickly became a print buying factor. Idealliance recognized those color scientists employing G7 with their G7 Expert Program. Likewise, printers employing G7 were recognized with the Idealliance G7 Master Printer Program.

According to an Idealliance press release dated July 1, 2007, “G7 is not just for commercial printing but for publication printing, news printing, flexographic printing and more. The G7 process has generated a great deal of excitement among print buyers because by following this methodology, we can print on virtually any type of press, in any location globally and on any substrate while maintaining a common visual appearance for a brand.”

Idealliance began training G7 Experts in early 2006. This program was an important factor in advancing adoption of G7 across the printing industry both in the United States and around the world. That year, specialists from China attended training and began calibrating presses throughout China using Idealliance G7 techniques. To continue the education that began with the G7 Experts training, Idealliance formed an alliance to serve as our regional partner in China.

Read the rest of the October 2020 Digest from Idealliance » 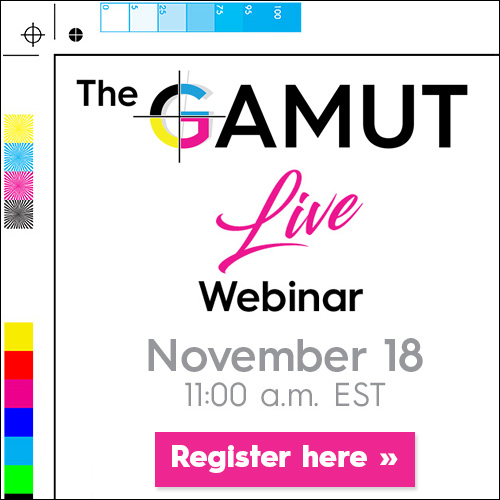 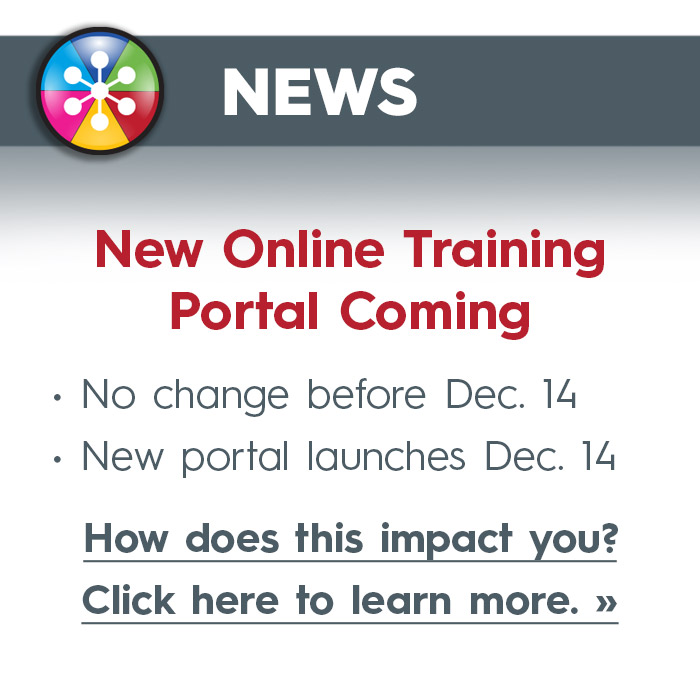